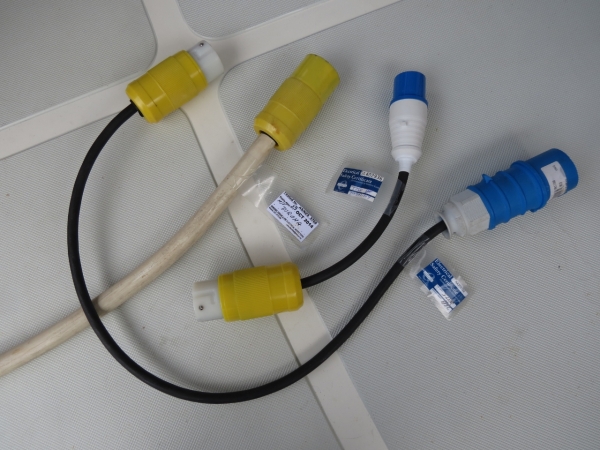 As we prepared Dirona for our trip around the world, we knew that a few of our US-based systems wouldn’t be compatible with those used in other countries. Connecting to shore power was an obvious one. As with household plugs, marine shore power connections around the world differ from those used in North America. Another example is propane. Many counties use unique connectors that are incompatible with North American tanks, and cannot fill foreign propane tanks.

Our first experience with incompatible shore power connections was at Papeete in French Polynesia. We’d travelled through Palmyra Atoll, Fanning Island, the Marquesas Islands, and the Tuamotu Archipelago, but hadn’t yet plugged into shore power since departing Honolulu ten weeks earlier. Our initial Papeete berth was on the super-yacht dock, where the available power was 100-amp 400V three-phase. To deliver the single-phase 240-volt circuit that Dirona accepts, we built an adapting cable using a connector the marina lent us.

Prior to departing the US, we had investigated building the appropriate adapters for the various countries we would visit. But it was difficult to determine the adapter type used in each location, so we decided it would be easier to source parts locally as necessary. We instead built 3 6-ft long 240V pigtails with a US-compatible socket on one end that we could fit with a location-specific plug on the other end. We expected to rebuild these frequently as we changed countries and encountered differing power socket designs.

Another option would have been to simply replace the North American plug on the end of our shore power cord with the appropriate location-specific one. But this would have slowly chewed away at the shore power cable that is permanently installed on the boat. And the pigtail option also saved time in not having to re-wire a given adapter once we had it attached it.

While in Papeete, we moved to a different berth where only 32A/240V single-phase power was available. To plug in, we bought a 32-amp adapter locally and built a second pigtail. The adapter was readily sourced from a chandlery in the marina. We also bought some smaller wire, as the conductors on the pigtails we’d built were too big for the 32-amp plug.

From Papeete, we travelled through the Society Islands, Beveridge Reef, and Tonga, but didn’t plug in again until reaching Port Denarau in Fiji. Our 32-amp adapter worked in Fiji as well, so we didn’t need to build a new one.

From Port Denarau, we cruised Fiji and Vanuatu, but didn’t use shore power again until reaching Whangarei, New Zealand. There we needed a 16A/240V adapter, and again this was easy to source at a local marine store.

New Zealand also required that any boat plugging into their power grid be inspected in-country and issued a Warrant of Electrical Fitness, along with any cables that would plug into shore. The picture at the top of this post shows our shore power cables with their New Zealand certification tags. The white cable is our main 50-amp power cable that is wired into the boat. To the right is a 16-amp pigtail that we built in Whangarei. And wrapping around from left to right is the 32-amp pigtail that we built in Papeete. These two pigtails carried us all the way through New Zealand and Australia, across the Indian Ocean to Mauritius and Reunion, through South Africa and into the Caribbean.

The next time we needed to adapt our shore power cord was after we crossed the North Atlantic and landed in Kinsale, Ireland. In between we spent time in the Barbados, St. Lucia and the US and Canadian east coasts, where all accepted standard North American plugs.

Our exiting pigtails continued to support us through most of our time in Europe. The only change we made was to use purchase 4 75-ft (25m) 16A/240V extension cords, as we have encountered situations where the nearest pedestals isn’t working or is an unusually long distance away. We’ve used three of them connected together to reach a pedestal 180 ft away, and in parallel to reach dual connections 125 ft away.

Although we bought the extension cords mainly for longer reach, they are much lighter than our 50A cable. So we run the 16A/240V cable between the shore power pedestal and the boat, then adapt that to our built-in shore power cable.

The most common shore power pedestal we encountered in Europe was 16A with an IEC 60309 marine socket. We occasionally encountered a three-phase 32-amp 400V source, so built another adapter to produce a single-phase 32-amp 200V connection. And rarely the shore power supply used a 15-amp SCHUKO household socket, and we built two pigtail adapters for these.

Our dual shore power system, where each of our two chargers can be powered separately, was another way of adapting to shore power. In this case, the system allowed us to sufficiently power the chargers from supplies as low as 6 amps, and to obtain a full 32 amps when only 16-amp service was available. We built one more adapter to take advantage of the dual shore power system, this one to produce 2 single-phase 16A/240V connections from 3-phase 16A/400V supply.

Shore power frequency is another area requiring consideration. The nominal frequency for North American utilities is 60 Hz, whereas much of the rest of the world operates 50 Hz. Our chargers can accept either frequency, but most of the appliances and electronic gear on Dirona can only accept 60 Hz.

Our first foreign shore power experience was in French Polynesia, where the service is an unusual 60 Hz/240V. We could operate everything on board directly from shore power as in North America. But everywhere we plugged in after was 50 Hz, from Fiji in the South Pacific through St. Lucia in the Caribbean.

We could charge the batteries and run any 120V appliances indirectly from a 50 Hz shore supply through the 120V inverter. But we initially didn’t have a way to indirectly power our 240V appliances, and had to start the generator to run the washer, dryer or oven. Our 240V HVAC systems were rated for 50 Hz and we did run them directly from shore power for a few months. But after a compressor control board failed, we concluded that the additional amperage draw was just too much at that frequency and decided to stop running them on 50 Hz.

We eventually adapted Dirona more fully to 50 Hz by installing a 240V inverter big enough to power all our 240V appliances, including the scuba compressor, as described in A more flexible power system for Dirona. This allowed us to run all gear on the boat indirectly from shore via a battery and inverter combination. The frequency-agnostic chargers supply power to the batteries that in turn power the inverters.

A shore power frequency converter could also have solved the problem. Both Atlas and ASEA offer converters that would handle the cycle difference. But these units are expensive—friends have spent as much as $50,000 on shore power conversions—and don’t provide some of the advantages the inverter solution does. With a battery and inverter combination, for example, the boat’s systems can draw well over 25A on a 15A shore power supply, and we can run the 240V appliances off the main engine while underway, without having to start the generator (see A more flexible power system for Dirona for details).

A further adaptation to 50 Hz supplies that we could have made would be to support both frequencies on the boat so that we could source electrical gear and appliances locally. We opted to instead source any gear from the US on return trips and keep Dirona a purely 60 Hz boat.

When we ordered Dirona back in 2009, we specified a propane barbecue and stove top, along with four 20-gallon (9 kg) aluminum propane tanks. Three of those tanks are stored in the cockpit locker underneath the barbecue, with a fourth in the aft port cockpit locker. We specified so many because filling propane tanks outside North America can be a real hassle. Many counties use unique connectors that are incompatible with those used in North America and cannot fill foreign propane tanks.

A common solution for world-cruisers in this situation is to build an adapter between an in-country tank and their tanks, and gravity-fill the on-board tanks. This is both time-consuming and wasteful. Time consuming because you have to first build an adapter that takes the local tank fitting and adapts it to the US fitting. And, once that has been done, the propane can only be shifted between tanks by slight differences in pressure caused by temperatures differences. Wasteful because it’s impossible to get all the propane from the donor tank into the receiving tanks, so you end up only able to use a portion of what you bought.

On our westbound trip from Seattle to the US East Coast between 2013 and 2016, we were lucky to find two places outside of North America that could fill them, once in New Zealand and the other time in St. Lucia.

We departed North America for Europe in 2017 with a full supply of propane and didn’t need to fill again until 2020 while in the UK. For a variety of reasons, we could not fill them in the UK, and gravity-filling our existing tanks held little appeal, so we instead decided to replace the existing tanks entirely with locally-sourced tank-exchange ones. We obtained tanks that would fit in our locker and adapted our existing tank-to-boat propane pigtail hoses to the UK tanks (see And We Have Propane). This solution worked well for our remaining time in Europe, as we could simply exchange empty tanks for  full ones whenever we were back in the UK.

One final area where we adapted to international standards was our fresh water hoses. Most of the world’s fresh water taps have a 3/4-inch BSP (British Standard Pipe Thread) threaded outlet, while the US uses 3/4-inch GHT (unofficially Garden Hose Thread, officially NH (“National Hose”) defined in ANSI B1.20.7).

This is a minor inconvenience, as our GHT fresh water hoses will attach to a BSP tap, but they leak a lot. An easy and convenient solution to this problem is to install Gardena quick-connect fittings on all our hoses and spray guns. Outside the US, we simply screw a BSP tap connector onto the freshwater tap and connect our hose. And in the US, we use a GHT tap connector. We frequently find the tap already has a quick-connect fitting installed, and we can just click our hose into place.

We also could have simply purchased BSP hoses locally, but we preferred having just a single set of hoses that worked everywhere.