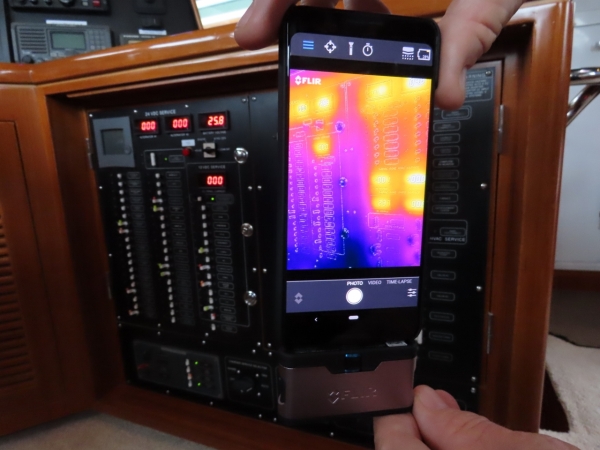 A few year back, we picked up a FLIR ONE Thermal Camera from Amazon. It’s only $200 and operates as an extension to an Android phone (IOS also supported on similar hardware) with an on-phone application. Every 6 months we use the camera to do a full scan of the breaker cabinet, the DC cabinet, and all high amperage connections. It’s important to do this test under maximum load, and what we are looking for is excess heat indicating a poor connection that is getting hot due to excess resistance or excess load for the size of the connector. Using this, hot spots are easy to see and we can make follow-up mechanical tests where there are suspicious levels of heat.

We haven’t found anything for years, but back when the boat was about 4 1/2 years old we did see one connection so hot it was easily seen without aid as a red-hot connector. We recommend a retorque of all connections after a boat has been in use for a year, or one year after any major electrical work. Many recommend an annual retorque, which makes good sense given the potential cost of a problem. But in our experience, it seems like after the first re-torque things don’t change or only change very slowly thereafter.

The picture below shows the AC electrical panel on Dirona. The bright orange sections are the 10 LED voltage and amperage displays. Above and to the left is the Furuno FA150 AIS glowing brightly (under the FLIR logo). There is electrical load on the system, but no heat around any other breaker or transfer switch, so we can see the system is healthy and operating with low resistance.

This next picture shows the 240V electrical panel while the generator is running, using a different FLIR ONE color palette. Looking at the 240V breakers in the center of the picture you can see that the oven and water maker are idle (bottom two double breakers on left), the two chargers to their right are running at full load, and the inverter (above chargers breakers) and washer/dryer (above inverter breaker) are running, but at fairly low load. The master breaker is warm but not hot. At the top of the picture, the four gauges above there are nice-looking but, as you can see here, they are wasting quite a bit of power. Along the bottom of the picture you can see four large manual transfer switches. If you look carefully you can see slight heat in the charger selector switch on the left and the rest are fairly cold. From this you can see that these manual transfer switches are reliable low resistance switches producing little heat. Even the switch on the left that is carry 43A is hardly even warm.

Below is an example of the DC panel on Dirona where all the manual transfer switches are in their normal position and running at fairly low loads except the 6kw, 240V inverter which is running at very near full load. Note how clear and easy to see the increased temperature around the Blue Sea System manual transfer switch for the 240V inverter. In this case it’s flowing at just over 200A on a part rated for 600A continuous and 900A short duration. Incidentally, that’s why that one rotary switch is gray whereas the rest are red. Those red parts are only rated at 350A continuous and, to have engineering safety margin, we went with a higher rating for the 240V inverter.

The following picture shows our KVH V7hts satellite system. The infrared imagery is not a concern from a connection or fire perspective, but is a good IR picture example since this system dissipates a surprisingly large amount of power in operation and shows what an IR photo can reveal about heat and heat flow.

We also took the obligatory pet picture and found that Spitfire is pretty well insulated except for heat leaks at the ears and face area :). In the left picture, Spitfire is curled up with head resting on paws facing towards camera, and in the right he is upside down with paws extended above body and tail towards camera.

2 comments on “Gear We Like: FLIR ONE Thermal Imaging Camera”