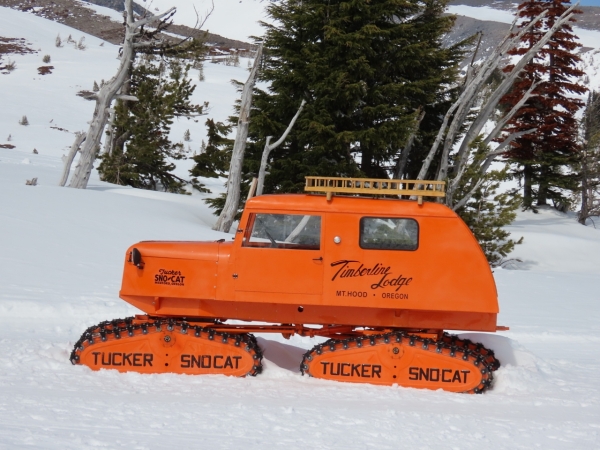 Distinctive bright-orange Tucker Sno-Cats have been operating at Timberline on Mt. Hood since the beginning of skiing in the area. They are so synonymous with the ski resort that the local Mt. Hood Brewing Company named a beer after the pair: the Timberline Tucker Double IPA. Featured on the label, and above, is a refurbished 1959 model that Timberline brought back to Mt. Hood as a show of appreciation and nostalgia.

Tucker Sno-Cat Corp of Medford, Oregon was founded in the early 1900s by E. M. Tucker, Sr. He grew up in a log cabin near Grants Pass, Oregon, and commonly walked through deep snow on his way to school. That inspired him to invent machines for cost-effective transportation over deep, soft snow and the firm he founded is the oldest successful manufacturer of snow vehicles in the world. The bright orange Tucker Sno-Cats are common in ski areas, but have also been in used in Arctic and Antarctic expeditions. While the typical truck-sized snow vehicle, or snowcat, has two sets of tracks, most Tucker Sno-Cats have four independent tracks. A few early models, such as the smaller Tucker Kitten, did use dual tracks.

After a day of snowshoeing at Timberline, we spent the following day on a driving tour of the Mt. Hood area. We stopped in at Mt. Hood Meadows, the second ski resort at Mt Hood. The ski runs there have a maximum elevation of 7,300 ft (2,225 m) and would soon close for the end of the winter season. Timberline, in contrast, has a maximum elevation of 8,540 ft (2,600m), and would keep running through August. We returned to Timberline to have a drink at the second-floor Ram’s Head Bar in beautiful Timberline Lodge, since it was closed when we were there yesterday. While there, the skies cleared for a great view to Mt. Hood, and we later spied the historic 1959 Tucker SnoCat.

Below are highlights from April 29th, 2022. Click any image for a larger view, or click the position to view the location on a map. And a map with our most recent log entries always is available at mvdirona.com/maps.