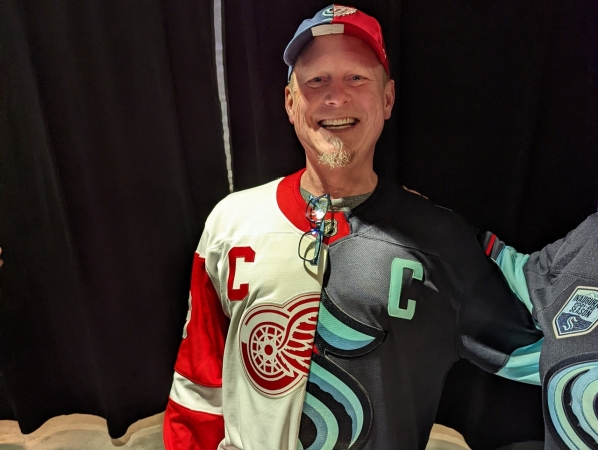 When attending a sporting event, we often see fans of the away team. Sometimes they are wearing a simple shirt, coat or cap with their team’s logo and colors, but occasionally they are dressed in elaborate attire. The ‘Raider Nation‘ fans of the recently-relocated Los Angeles Raiders are particularly known for their fervor, demonstrated through complex and often intimidating outfits. At some Seahawks home games against the Raiders in the 2000s, so many costumed Raider Nation fans were in attendance that we felt like we were in Los Angeles rather than Seattle.

Some of these fans have traveled to see the game, but many are locals who grew up elsewhere and still love their former home team. Now that they live in a different city, they are conflicted in supporting their new home team. This isn’t really a problem until the two play each other, forcing a decision. Seattle resident and Kraken fan Sean Boyle, who grew up near Detroit as a Red Wings fan, managed the conflict creatively. When Detroit plays in Seattle he sports a “mixed-feelings” jersey, half Kraken and half Red Wings, with a cap to match.

Prior to watching the Krakan take on the Red Wings, we drove along the west side of Lake Washington, taking in the blossoms and beautiful view homes. And just before the game, we took a behind-the-scenes tour of Climate Pledge Arena and watched the Detroit Red Wings playing soccer to warm up.

The game itself gave fans of both teams something to cheer about. With the score 2-0 for Detroit at the end of the second period, it was looking like a sure loss for Seattle. But the Kraken came alive in the final period and rapidly scored four times to take an exciting win.

Below are highlights from March 19, 2022. Click any image for a larger view, or click the position to view the location on a map. And a map with our most recent log entries always is available at mvdirona.com/maps.