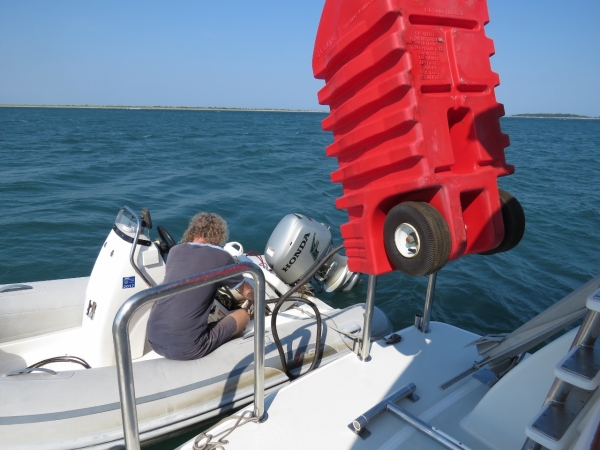 One of the customizations we considered when building Dirona was a built-in gasoline storage area. We wanted to be able to carry on the order of 50 gallons (227 L), and didn’t want to manage a large number of individual jerry cans. We couldn’t find a place for built-in storage, however, and instead opted for 2 29-gallon (110 L) wheeled gasoline tanks. We’re really glad we couldn’t find a solution to locating the gasoline storage, as having portable containers turned out to be much more convenient.

When considering built-in storage, we expected that we’d replenish the gasoline supply when fueled Dirona. But on our trip around the world, gasoline often was not available where we took on diesel. Commercial docks, where the price is best, seldom stock gasoline. And we frequently fueled from a truck driven to our location, with again no availability of gasoline.

In some cases we could get gasoline at a nearby marine location, so we could bring Dirona there. But sometimes the only option was for us to wheel the tank ashore somewhere. For example the fuel docks in Wellington, NZ and Darwin, AU had only diesel, with no marine gasoline supply nearby. In both cases, we fueled at automotive gas stations. In Wellington, we walked the tank to a nearby station and in Darwin we loaded the tank into a rental car and drove it to a gas station.

Several times the gasoline source was some distance away by water and it was much faster to just run one of the tanks over in the tender. For example, in the Marquesas Islands, we used used more gasoline than expected so ran the dinghy 12 miles from our anchorage at Tahuata to the nearest gasoline supply at Atuona on Hiva Oa to refill the deck tank. This would have taken a half-day at Dirona‘s speed, and we still needed to bring the tank ashore to fill at an automotive station. Other times we were anchored or docked near the fuel station, but moving Dirona there would have been much more hassle compared to just taking the tender. And in many cases these docks were designed for much smaller boats, so we couldn’t safely tie Dirona off anyway.

We purchased Tempo Ultimate Gas Walkers, now sold under the Moeller brand. We store them on the boat deck, on the starboard side in front of the tender, under a custom navy canvas. The cover protects the tanks from the sun and hides the bright red color so that they blend in with the rest of the boat’s color scheme. When using the tender a lot, we fill both tanks. But gasoline doesn’t last well, so when we’re planning to use the tender less, we only full up one tank and sometimes not even all of that one. The tanks can easily be refilled in place on the boat deck. We just slip the cover off slightly and pass a hose up from the dock.

Draining the tanks is a little more work, as the tender needs to be moved to access them. Initially we refilled the tender’s 9-gallon (34 L) tank by lowering the entire deck tank by crane down to the tender to the gravity-feed the fuel. But over time, we found it more efficient to fill the tender using small jerry cans. We pull out one of the big tanks to fill the smaller cans, and transfer fuel to the tender. This way we can refuel the tender either in place or in the water, and we need to pull out the large tanks less frequently, only when the tender is low and all the smaller cans are drained.

We carry 2 5-gallon (22.7 L) and 4 1.25-gallon (5.7 L) tanks that we stow behind the stairs from the boat deck to the flybridge. When we refuel the big tanks, we also fill up the tender and any of the smaller tanks that are empty, for a total supply of 79.5 gallons (361 L). This is a lot of fuel, but we use it. We refueled several times during our 2020/2021 trip in Norway. And carrying a lot of gasoline means we generally can replenish based on convenience rather than need. Another advantage of using the jerry cans is their no-spill nozzles that are easy to use and reduce the likelihood of a gas spill when refueling.

The tanks have lasted well and the only maintenance they’ve required is to occasionally reseal the valve-to-container and hose-to-valve fittings. The tires also need pumping up, but we rarely need to do that as we typically refuel on the water and don’t often roll them anywhere.