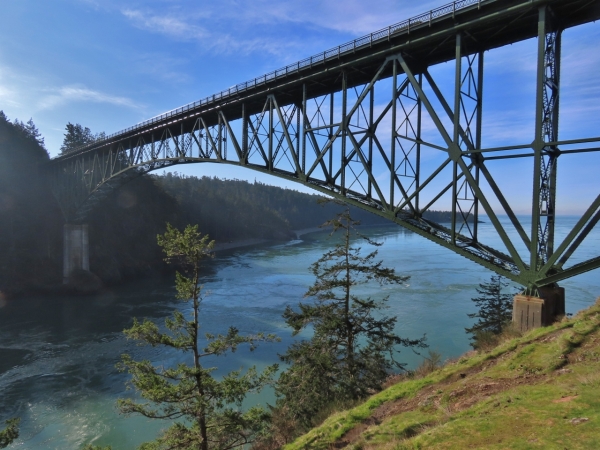 Whidbey Island is the 4th largest island in the contiguous United States at 169 square miles (437 km2), and the largest in Washington State. Along with Camano Island, it forms Island County at the northern boundary of Puget Sound. Whidbey has many waterfront parks, numerous interesting towns, and also is home to Naval Air Station Whidbey Island and the Nichols Brothers Boatbuilders, where many local commercial ships were built. For boaters, the island has several docks and sheltered anchorages. We’ve anchored at the island many times in our first boat.

Until 1935, the only way to reach Whidbey Island was by air or sea. That changed with the completion of the Deception Pass Bridge, a factor in the decision to locate the Naval station on the island. The bridge spans narrow Deception Pass, where currents can exceed 9 knots, generating huge whirlpools and upwellings. Slow boats like Dirona need to pass through near slack water. The bridge is considered one of the scenic wonders of the Pacific Northwest, and the surrounding park, popular year-round, is the most visited in Washington.

Two ferries also serve Whidbey Island, one to Coupeville on the northwest side of the island from Port Townsend on the western side of Puget Sound, and the other to Clinton, on the southern part of the island, from from Mukilteo, halfway between Edmonds and Everett on the Washington mainland. These ferries are very busy, particularly in the summer, and the Coupeville-Port Townsend route is one of only three in the Washington State system that support vehicle reservations.

From Port Angeles, we drove to scenic Port Townsend and took the ferry across to Coupeville. We easily made it on stand-by in the morning, but the afternoon routes were already fully booked. From Coupeville, we made a driving tour of the northern portion of Whidbey Island and stopped of at Deception Pass State Park to take in the bridge and the view. We had lunch in La Conner, another favorite past boating destination for us, before returning back home to Seattle.

Below are highlights from February 6th, 2022. Click any image for a larger view, or click the position to view the location on a map. And a map with our most recent log entries always is available at mvdirona.com/maps.